I’m going to show you Keurig K Supreme Cleaning Instructions Coffee Maker, if your keurig coffee maker is not working sometimes, you’ll press a brew and nothing no water comes out, you may think oh the machine is completely broke on the inside all it could be is your needles are clogged, so this Keurig K Supreme has 5 needles up at the top and 1 needles at the bottom.

Now this basket comes apart and the easiest way i found is just to kind of grab it and just kind of kind of like break it apart, it’s going to snap there’s, these two little ears that come off now, there’s the needle that is not, you know there’s the bottom of the needle, the needle’s right there.

So get yourself a paper clip and stick it from the bottom, you can see, it’s not going to come all the way out but you can see the needle, it’s easy and then you’re going to take this to the sink clean this out really well, this is a good idea to clean this anyway, you do get some kind of coffee grinds and stuff in here from time to time, so wash this out with soap and water really well run a bunch of water through this while you’re, while you have the paper clip and you’re kind of cleaning out the coffee grounds.

So that’s how you do that and then to put this back together, there’s two little ears actually, there’s four but and there’s two ears on this side, so line those up with those little holes and it’ll snap and then it doesn’t kind of turn and it’s on there pretty good, now the way that you install this, so you’re going to see the words caution sharp needles those face you and there’s these two ears here. 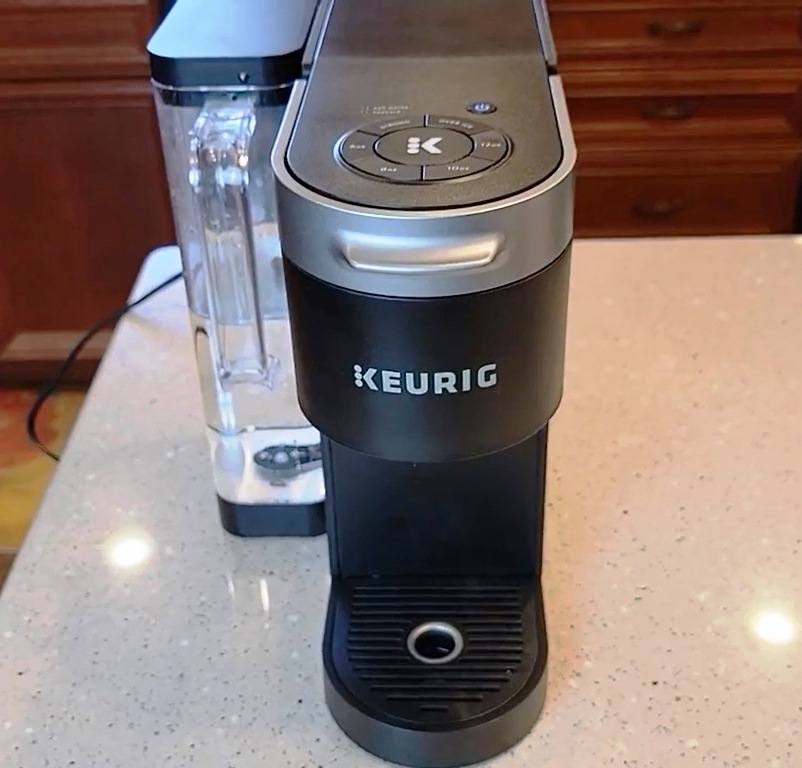 So you’re going to put it in like this and then you just kind of snap it in and make sure it’s nice and flush the words are towards you and you can read them and then it’s flush, there’s the bottom needle is all clean, now we’re going to concentrate on the top one. So unfortunately the top one, you’re not able to take apart but it has holes now, the holes aren’t readily apparent, you’ve got this like neoprene washer that’s kind of covering the holes up a little bit but there’s a hole here and it goes this way it goes sideways, there’s no holes going like in the bottom of this, these holes are going sideways and the same with this needle, the hole doesn’t go straight through it kind of comes at an angle it goes here and then it goes there, there’s three holes in this big needle be careful, this is the sharpest of them, so again get your paper clip we’ll do the big needle first and you got to come at an angle, you might have to bend it a little bit there, see how i’m at an angle, i’m not going straight if i try to go straight, it doesn’t go on and then if i come here at an angle it might be easier to go the other way.

I can go to that there see there’s that back one, there’s the big ones cleaned out, you can go up in it a little bit that will clean out the tube, there might be but don’t go super far that is just a plastic tube, you could poke a hole in it, so now let’s do these four these are special to this supreme, it’s called the multi-stream, so they go at an angle and again you might have to push that washer that seal back but see how there’s cleaning that needle like there, it’s hard to go that way any like you want to go up into it but you can’t and same with this one, they did position these to where you can get to all of them pretty easy and then we’ll do this one this was the hardest one to me there, now you might get some crud, you know you can rinse this off but we’re gonna do a freshwater rinse with the keurig, that’ll force some you may have to do, you have to do this a couple times, you may have to poke these holes and then we’re going to close the lid.

So we’re going to close the lid and then we’re going to do a couple fresh water rinses, we’re just going to do we’re gonna pick eight ounce and hit the k button and just fresh water will rinse through there, so again i say i’ve got my knees and these things can get pretty dirty, you know especially this area, you can get some a lot of coffee grounds and stuff in here, so you definitely want to keep up on this and using a the keurig sells a rinse pod those work really well too but they don’t necessarily get in there and clean the needle like you should, so say you’ve got the needle cleaned, you’re just going to close it, make sure there’s no cake up hit the 8 ounce and just run some fresh water through there and you may have to do this, a couple times like i was saying and be careful those needles can be hot, after you do a fresh water rinse that area can be kind of hot, you may see a bunch of gunk come out here but you should have a pretty nice stream coming out.