By admin On July 17, 2016 In Keurig 733 views
★★★★★
Keurig – Excellence In Single Cup Coffee Brewing,5 / 5 ( 1votes )
Keurig is an established coffee machine manufacturer specializing in single-cup rapid-brewing systems for coffee or tea. The company takes its name “Keurig” from the Dutch word for excellence, and Keurig prides itself on being the leaders in single-cup brewing technology, gourmet single-serve coffee and tea packages and customer service.  The technology for Keurig’s innovative single-cup brewing system was unveiled in 1998, and for over 10 years has allowed coffee lovers to enjoy a variety of perfectly brewed fresh coffee in less than one minute. There are commercial and domestic models available for purchase, with both systems using the same K-Cup package for brewing single-cup coffee. One model, the Keurig Mini, is rated for both commercial and household use.  Keurig has received much recognition for its role in inventing the single-cup brewing system, and featured in inc.om’s fastest 500 private companies in 2007.

Keurig is a subsidiary of Green Mountain Coffee Roasters Inc, but has forged partnerships with a number of well-known and gourmet coffee roasters, tea makers and other beverage makers and created K-Cup versions of their products, including Diedrich Coffee, Gloria Jean’s, Van Houtte, Twinings, Tullys, Emeril’s and Bellacinao. All of the coffees offered are gluten and gluten by-product free, and many of these companies also provide fair-trade and organic varieties of their beverages. Van Houtte, Timothy’s, and Emeril’s are among the dozens included in the list.

By continuing to improve the design of their brewing system and K-Cup package, Keurig has taken the guesswork out of making the perfect cup of coffee, removing the process of grinding the beans, measuring and tamping, handling filters and tidying up the mess afterwards. The single-cup brewing system eliminates the need to measure either water or coffee, so the consistency of the brew is guaranteed. More importantly, Keurig has given coffee lovers the freedom to enjoy a variety of flavours in one efficient and compact system, as well as changing the way coffee is served – one fresh cup at a time. 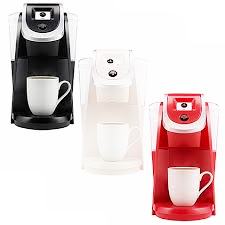