By admin On July 19, 2016 In Keurig 725 views
★★★★★
Keurig Vue Brewer V700,5 / 5 ( 1votes )
Keurig, the most well known brand of single cup coffee makers has just taken it’s technology to the next level with the Keurig Vue Brewer.  Single cup coffee makers have been around for a while but Keurig has set itself apart from the rest with its brewing technology.  Keurig brewing systems use a special technology that utilizes just the right amount of water pressure and temperature to brew the perfect coffee one cup at a time.
The Keurig B60 brewing system has been a very popular single serve coffee maker for many years with thousands of positive reviews.  Many B60 users report this Keurig model as being very durable, brewing coffee at the just the right temperature, and offering the largest variety of coffee and teas.  Keurig systems also have a solid reputation for being the fastest single cup brewers on the market.
Previous Keurig models, such as the B60, would only brew coffee in three different sizes.  Users of this particular model are able to brew coffee and tea ranging from 5.25 ounces to 9.25 ounces which is an average cup of coffee but seen as limiting to some.
New Features of the Keurig Vue Brewer v700
The new Keurig Vue Brewer offers many new features that previous Keurig owners are sure to love.  Coffee lovers have very different requirements when it comes to brewing the perfect cup of coffee.  Some like their coffee extremely hot while others just like it warm.  The Keurig Vue Brewer offers a wide range of temperature settings which ensures that every cup of coffee is brewed to perfection.
One of the most notable features of the Keurig Vue Brewer is that it brews iced beverages along with the many varieties of tea, hot cocoa, and gourmet coffees.  Iced beverages and coffees are extremely popular and Keurig has delivered with this much needed option.
Also, new to the Keurig Vue Brewer is the interactive color touch screen which makes selecting the temperature and the type of beverage a breeze.  Just select a few options and within minutes the perfect cup of coffee is ready for your enjoyment. 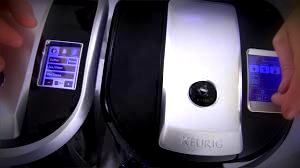