By admin On November 9, 2015 In Keurig 711 views
★★★★★
Inside the Rocket R58 Dual Boiler Espresso Machine,5 / 5 ( 1votes )
We got something real exciting here to talk about. We have the Rocket R58 Dual Boiler Espresso Machine. Brand new to the United States. I think we have the first one in the US. So we wanted to get some information out on this right away. Rocket’s first dual boiler machine that people have really been anticipating. Yep, Rocket’s always been known for making machines with beautiful style. That’s been the thing. And also good components inside, but style has been one of the main draws and now they’ve put that style into a dual boiler machine. I know you went to Italy in July of 2011. Yep, I had the opportunity to go to Italy and met with Andrew who owns it. And then the Rocket team. And got a good tour of the factory and I saw the prototype of this and some nice pictures of it. They have a hell of an operation. The other thing I noticed right away, no digital readout on this.
They decided they didn’t like the idea of having the PID on the front of the machine. The PID being the digital display. It takes away from the beauty of the machine so they added a separate unit that plugs into the bottom.  And you do all your programming from there. Now one of the things I’ve read that they’ve done a little bit differently with this machine is they are, when they give you a temperature of the brew boiler it’s an exact temperature. Yeah, the temperature of the brew boiler. Other machines usually have the Jaquar PID system and that has a calculation of built in offset which will calculate a temperature at the brew group based on the boiler temperature that it’s maintaining. So that’s kind of different then most other machines then.
We’re getting the actual temperature in the boiler not a calculation of what’s at the brew group. And you’re using the chart to calculate what your actual temperature is at the brew group. Now on the remote you can set the pressure for the service boiler which is your steam and hot water, you can set the temperature of the brew boiler.  Right, it does four languages I saw, oh and this can be plumbed.  So you can tell it that it’s plumbed so that it’ll take water not out of the, and that’s how you tell the machine you use the control panel for the PID system you can program that in for plumbed or reservoir.  And oh, and the other thing that you can do is you can shut the service boiler right of if you weren’t going to be using any steam or hot water. 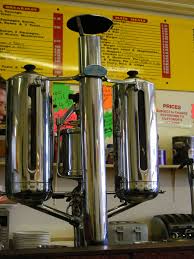 Yeah the service boiler will be the steam boiler, if you don’t want to use that. And the brew boiler is independent of the steam boiler so it doesn’t need the hot water coming from the steam boiler to preheat the water in the brew boiler like with other machines. What are some of the things here that people are going to see that maybe they haven’t seen on a Rocket before. Okay well the different style steam valves, different style steam knobs, and steam wands are different also. I like the big R on the steam valve there. Yeah, they put that on the left one, Andrew had designers come up with that.  And the valves on here, I don’t think I’ve ever seen such a large valve on a machine before. I mean these are like commercial.
Yeah they’re commercial valves and they’re very smooth and when you open an close the steam knobs it’s a very smooth feel to it. On the left side here we have the large gauge that’s the steam pressure gauge tell’s you what’s the pressure in the steam boiler. On the right hand side is the brew pressure and it’s set right now to run between eight and nine bar of brew pressure so that’s basically the pump pressure.  On the left hand side here we have a light, that light tells you everything’s good to go. When you’re low on water that light will flash. And the switch above it is just the main power switch, it just turns the machine on. Todd, let’s talk a little bit about brewing and steaming on the Rocket. it’s got the commercial grade E61 brew group, nine pounds of metal there right? Yeah it’s all chrome plated brass, same brew group they use on the other machines.
And on the side here you’ll see the lever, this lever’s a three position lever.  It’s down when it’s in the off position, raises up to the middle position and it releases some water out of the coffee for pre infusion, it kind of cooks the coffee a little bit first and then you raise the lever up and it turns the pump on to get full pump pressure which would be set about nine bar, when you get all the coffee you want, push this lever all the way down it’ll release all the water from the coffee into the drip tray. So you get a nice dry puck with that three way valve on these? Exactly yep, and on the side here we have the steam wand, and its two hole steam tip that it comes with releases a lot of pressure quickly so the pressure of the boiler does start to drop a bit, but it does a nice job, it gives a good roll and it can do eight ounces of milk without a problem.
So Todd the machine does have a commercial style rotary pump? Yeah the rotary pump, RPM is the brand. Very good, high quality found in many other rotary pump espresso machines. And the pump pressure’s adjustable from underneath the machine so in case you ever have to adjust that it’s easy to get at. It’s not a big deal. So I noticed that it comes with two porta filters. Yep, a single spout and a double spout. Commercial style brass, chrome plated, 58 millimeter standard stuff.  And then the machine’s also plumb able so it comes with the. It comes with the stainless steel water line and then a brass adapter uh about a five foot water line and then it has a real flexible rubber hose to hook up for the drain line.  And I saw the uh, it does come with a tamper.
A metal tamper, which is nice. You know, but I kind of, for me it’s kind of an interesting choice with the look of the machine that it is metal but I see so many chrome tampers and the machine’s so shiny and this one. Yeah most of the machines come with plastic tampers so I’m happy with it. Okay so that’s a step up. And of course the logo micro fiber cloth for keeping things clean. Of course. So it also has the video from Rocket on how to make a great espresso. Um, and a scoop, so a nice selection of accessories with the machine. Yes it does. Alright Todd, great looking machine wrapped in full metal, what sort of metal are we looking at here? It’s 304 stainless which is a very high grade non-magnetic stainless steel. I also noticed on some of the other Rocket machines the surround around the cup warmer up here is not metal, this one is.
Yep, this is all metal, yep up at the top also you have the stainless steel cup warmer. Passive cup warmer, it’s not electric. This looks like a really cool machine I mean I love the look of it, I love the ball joints on everything here the huge valves. What did you notice here? Pretty much the same thing, it looks like a very well made machine by Rocket. As expected.  And it’s beautiful and it looks like it does a great job, we’ve brewed with it, we’ve steamed with it, uh we like it. We do and we’re going to rip this thing apart so keep reading, cause we’ll put up a article, we’ll show you the guts and what’s driving this whole thing. Yeah and that’s the part I’m gonna really enjoy.