I’m going to show you how to keurig k supreme descale, so i’m going to be using the keurig descaling solution is your descale light on, this is how we’re going to get it to go off, and you should be keeping up on descaling about every 3 months.

So you can get this off amazon for 20 or go to walmart and get it for six bucks exact same quantity and everything first thing we’re going to do is over here at the water reservoir. If you’ve got a water filter in here, you may have a water filter, that filters your water make sure you remove that we’re going to dump out this water that we have in here right, now that black thing down there that’s not the water filter you would notice that it’s kind of a big thing that sticks up in here.

So i’ve got the water emptied out we’re going to make sure we don’t have a k-cup in here, we’re going to leave this empty for the entire process, now this case supreme is a little nicer machine it, actually has a descale mode and we’re going to go into that mode.

I’m going to show you how to do that and it kind of does an automatic descaling process for us, you need to give yourself about 20 minutes to do this about 20 to 30 minutes, so the manual for this is really good and it talks about using the descaling solution and it, actually gives you directions on how to use this, but if you ever wonder where the directions are on this bottle, you got to peel this and once you peel it we’re going to be using for keurig brewers with a water reservoir, basically we’re going to empty this entire contents into the reservoir, and then we’re going to fill this bottle up with water, and dump it in there.

I’m also going to do another article with vinegar but this is citric acid, this is what keurig recommends they also allow you to do vinegar, but it takes a little bit longer this is a really quick way to descale your coffee maker. So we’ve got the water reservoir empty, we’re just gonna pour this in the entire contents, it doesn’t smell that’s one of the nice things about using this solution is it doesn’t really smell vinegar kind of leaves it smells a lot and you got to do a lot of rinsing. so then i’m going to take the bottle, i’m just going to fill it up with just fresh water, now i’ve got this bottle full of water, i’m just going to dump the water. 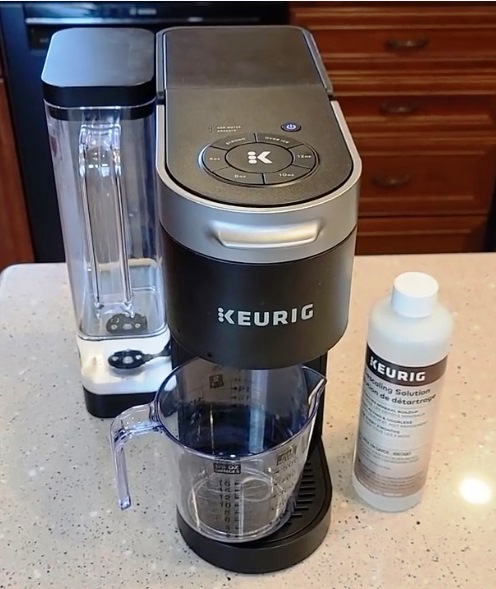 See Also : The One Thing to Do for Under Counter Coffee Maker

So we’re going to leave everything the way, it is now i still have some water and descaling solution in here, i’m going to take this over to the sink, i’m going to dump the rent this remaining out and i’m going to wash this with soap and water, and put fill it up with fresh water.

We’re supposed to keep doing this emptying this after 12 ounces, and then press the k button until the add water light comes on again, once that add water light comes on again, your machine is going to be sufficiently cleaned out of the descaling solution, and it should exit the descaling mode if it doesn’t exit the descaling mode, you just want to unplug your machine wait about 3 or 4 minutes and plug it back in, now it says if your descale light, if you can’t get it to go off you’re to do this whole process again, so with another bottle descaling solution run it through the machine, and see if you can get that descale light to go on but this descale light is on now because we’re in descaling mode and that light should go out when we’re done.

So when you’re doing this it does kind of splatter now normally this doesn’t splatter when it’s making coffee, but the stream is coming out so soft that it kind of splatters, so it does make kind of a mess, so it might be a good idea to put a towel around it, okay so when i got down to the bottom after about 4 or 5 of these emptying out it gets down to the bottom and the descale light just automatically goes off, and powers off so that worked really well, so now i’m going to fill the water reservoir up.

So i’ve got my water reservoir filled up again for the second time, now i can just turn power on my descale light is out it came out of descale automatically, so this is a really nice mode i really like this again, you might have to wipe this off it does get quite a bit of steam and water around here, but it also kind of cleans out the needles really good and everything and that’s all you’ve got, so about 30 minutes to descale this again walmart’s about 7 dollars, but amazon really charges i think, because it’s shipping something that’s maybe not good through the mail or something but definitely walmart has a really cheap.

So you might see on amazon, this is their number one descaling solution and i tried it, i don’t like it, it’s 7 dollars on amazon the bottle is a lot smaller, but what i noticed is it’s citric acid and another type of acid, but it’s kind of soapy and you know this one’s a little soapy, and you get a little bit of suds from it, but this one just seemed like you got a lot more. So this has a lot of reviews, a lot of people buy it you know and it says, it’s for compatible with keurigs, but i just don’t recommend it you know walmart is selling this for 6 dollars, i just i would get it at walmart for 6 bucks.

Leave a reply "How To Keurig K-Supreme Descale" Cancel reply