How to Froth Milk with a Pannarello Wand

By admin On November 10, 2015 In How To, Keurig 748 views
★★★★★
How to Froth Milk with a Pannarello Wand,5 / 5 ( 1votes )
Okay so now we’re frothing, what we do is keep the tip well below the surface of the milk, if it gets near the surface it’ll blast big hunks of air and that’ll make a mess with big bubbles and you’ll never get rid of them. I’m gonna show us how to froth using the Pannarello wand, also known as the turbo frother. Now Todd, we get a lot of questions from customers on how to get a quality froth using the Pannarello wand. Why don’t you tell us some of the questions that we get. Okay well, we get questions, people will mention that they have a problem getting a creamy froth. They say they’re getting too much air on the froth and they don’t like that. So the top of the froth is cold while the milk underneath may be hot. But, they want to get more of a creamy texture. Some people call it micro froth which is important to get a good creamy froth because that’s the way the froth mixes with the espresso and you geta really creamy drink.
The taste is fantastic.  So that’s kind of what our goal is to day, to show you how to do that. Okay, so what do customers need to know on how to froth? Okay, it’s all about an air hole that is on the side of the Pannarello wand. It’s all a matter of, what you do is you want to inject just the right amount of air, but not too much. So at first you want to froth your milk, when you get enough froth you take your milk and you actually cover up the air hole and there’s no longer sucking air in so it’s not frothing it’s just heating. So it’s all about timing, making sure you know when to cover the air hole up. There’s two kinds of Pannarello wands we’re going to look at today, but there are many other styles on lots of different machines. You see it’s all about the, the air intake hole on this one is right here, you see that little groove? I’m gonna take it off, take a little better look at it. Right there, then there’s a little groove cut into there where that milk is.
That’s how it sucks air around this o-ring. So as soon as the milk covers that, it’ll stop frothing. Here’s the other type of Pannarello wand, why don’t you point out the hole so they don’t have to look at my fingernails okay? Right here about a quarter inch down. Now Todd why don’t you demonstrate for us. Sure, okay first, always want to use cold milk. Cold milk always froths best, always do your frothing, which is air injecting when the milk is at its coldest.  And you also want to be careful how much milk you put in the pitcher, if you over fill it, it’ll overflow the pitcher or we won’t be able to get it hot enough. So we’ll get about a third full, which is, which would be right around, right about to there.  And you also want to know that pitcher size is important also. If you’re doing a larger one obviously you want a bigger pitcher, a smaller or one drink, you use a smaller pitcher. Now what if you don’t put enough milk in the pitcher, is that going to cause problems as well? If you don’t put enough milk, it won’t cover the air hole soon enough maybe and you might get too much air in the froth. 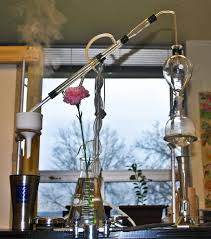 Okay. So you do want to be a little bit careful about that. Okay, like with all machines, you always want to purge any water out of the wand that’s in there. All have a little different technique. I filled this pitcher a third full of milk. Put the tip well below the surface. Open the steam knob and it’ll start frothing. how hot do you want to make the milk? Well, never over 160 degrees, after that it’s gonna lose all its flavor and it’s not going to be good. I like it about 140, that’s a good temperature. Okay, see the milk’s expanding and uh, I’m going to feel the bottom of the pitcher, get the temperature here, it’s starting to get warm. See the roll that it’s got going in there it’s pretty nice.  Okay, now, I have all the froth I want, cover the hole, now it’s not going to froth anymore. The hole was right there.
Now it’s just going to heat the milk. Now if you put your hand on the bottom of the pitcher you feel it, when it gets real hot with the palm of your hand you know you’re about at 160, but I’m a little less than that, cause I like it less than that, but you can see the froth there. Looks great. It is nice, now, I’m just going to swoosh it up a little bit, I always like to swoosh it up a little bit like this before I pour it. Now that’s a nice froth, look at that, and it’s very easy to do. So, let’s pour a latte. Sure. Okay, just brewed a nice espresso here, and, milk’s been sitting for a couple minutes here while we brewed the espresso so let’s just swish it up like this to keep it nice and creamy and then we’ll just show you how nice it comes out. Wow, There we go. Looks great. Yeah, the way that is, the milk will mix with the espresso just right and it’ll give a great flavor. Thank you so much for showing us how to froth using the Pannarello wand. Glad to help.

Related Post "How to Froth Milk with a Pannarello Wand"