So your k supreme plus, so say your coffee is not tasting as good or your coffee is not as hot as it used to be or the machine is getting really loud, it those are signs, it’s time to descale you also have a display up here that may say clean or descale that means, it’s time to descale this thing has a descaling mode, the only way to get that light to go out, you have to run the pro the mode the descaling mode that.

I’m going to show you here now in the manual that comes with the descaling or with the keurig, it doesn’t talk about it you have to go on their website and find the user manual on there that talks about how to desk how to descale it and get into the mode, and again they say that light comes on automatically after 250 brews.

So that’s pretty much i mean that’s average maybe every 6 months maybe once a year, they recommend doing it every 3 months, if you have really hard water, you may want to do it a little bit more but i would do it, at least every 3 to 4 months now inside your keurig, you got a heating element and it may get if you have hard water mineral deposits are going to get on that heating element that heats the water, and your coffee may not taste as good or get as hot.

So they want you to keep up on descaling, so that your keurig keeps working at its top performance and i do think it’s a good idea that you do it, i am going to do another article on how to use distilled white vinegar, this is a buck 50, this is $6, you can save a lot of money, but you do have to follow a little different procedure when you use the white vinegar.

So i’m going to do a different article on that i’ve tried some of the off-brand descaling solutions, i don’t recommend those off amazon, i really do like the keurig at first, i thought it was a little overpriced do, i really have to use the keurig but no this is actually a really good descaling solution, it doesn’t taste, it doesn’t smell vinegar kind of smells bad when it’s going through this process but this is kind of odorless and tasteless and it’s a little quicker because you don’t have to do as many rinses give yourself about a half hour 45 minutes in order to do this, you’re going to need a container that holds at least 12 ounces which is about 2 cups.

So here we have the descaling solution now they do have a set of instructions, if you look right here it, says to peel this and when you peel that it does reveal some instructions and we’re going to be using it for brewers with a water reservoir, but these instructions don’t tell you how to put the machine in descaling mode, so they are they kind of help, but you need to do a little bit more.

So if your power is on, press the power button we want it off, now you’re going to hold the 8 ounce and the 12 ounce button for 3 seconds at the same time with the unit off, okay see how the big that’s that started flashing and that says descale, so now we’re going to press this make sure you got a container, we’re going to press this it changes to descaling and it’s got three little lines going across what it’s going to do now, it’s going to run some of that solution through the machine, it’s starting to come out and it’s going to run a full 12 ounces of that solution through and during this whole time the big k button is on steady and it says descaling that display is steady, it’s just flashing in my article, we’re going to continue to do this until the add water light comes on. 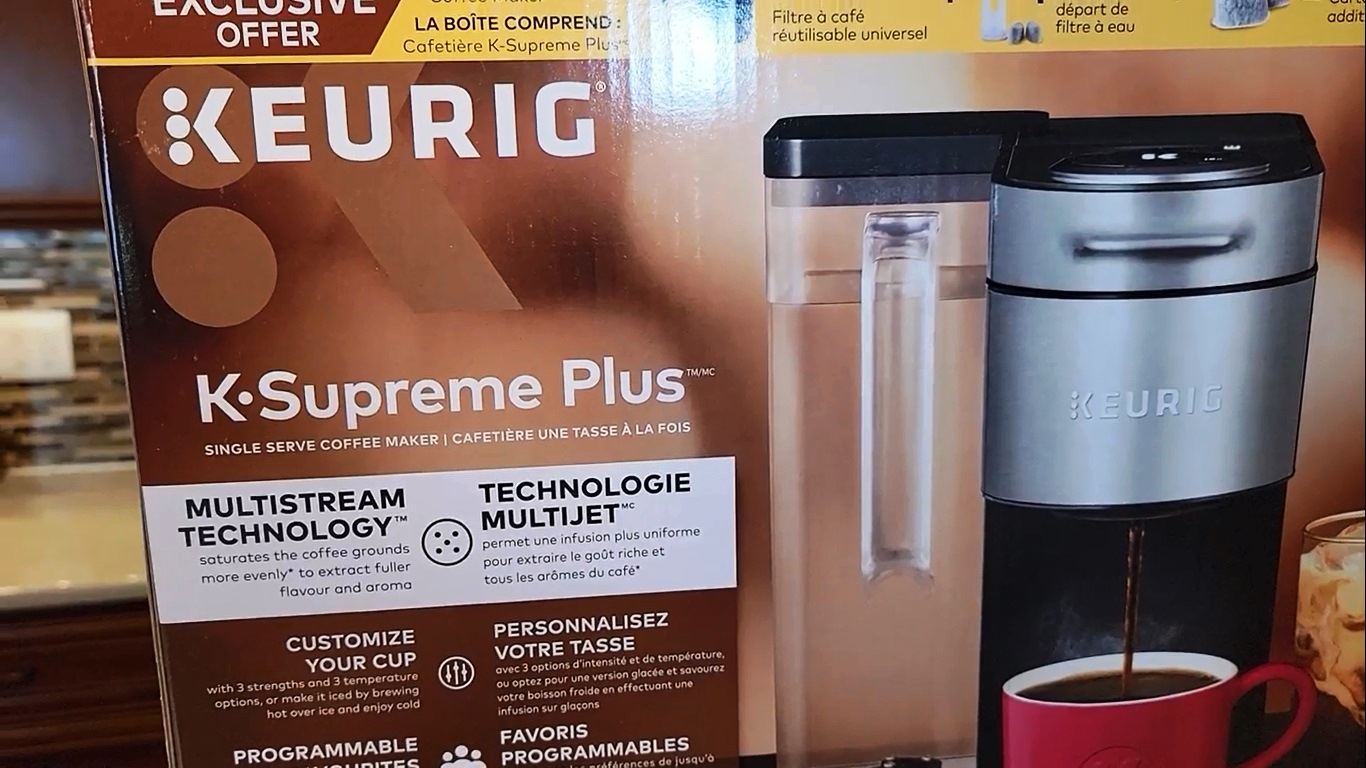 So this this takes a couple minutes to run that 12 ounces through and we’re just going to throw this down the sink when we’re done, i forgot to take make sure there’s no k-cup in here after make sure you for this entire process, there’s not going to be a cake up in here, so i should have told you that the very beginning leave the k-cup empty and make sure that needle baskets in there.

So here it says descaling still it ran 12 ounces through now it changed to the word descale, so i got to go throw this out again, don’t do anything to the machine, the k button is flashing now, i threw that out, just press the k button, it’s going to continue the descaling process, we’ve got a little bit more solution to go, it’s going to run another 12 ounces through the machine, you see we’re getting close to the 12 ounces we’re still running the descaling solution through it still says the word descaling, okay it’s gonna say add water here in just a second, add water okay, don’t do anything in the machine, it looks like it’s all off leave it alone, now you’re gonna take this, there’s it’s still got some descaling solution in there just throw that out and you’re gonna wash this out with soap and water, and you’re gonna fill it up to the max line with fresh water and empty that out too.

So i washed this out, i filled it up to the max line, it’s just got fresh water in it now, okay so now i didn’t do anything to the machine, the add water light went away and the descale light came back on now i got to continue this process until the add water light comes on again, or no it’s going to stop, it’ll just the descaling will stop, so the k button is flashing, i’m just going to press the k button now, and it’s going to run 12 ounces of fresh water through the machine, and the last time, i did this it took 5 times of emptying this with fresh water and then the descale light went out.

So it doesn’t necessarily run the entire contents of fresh water through there, but it does i think of 5 times and like i said it says descaling right now and you can see the 3 little dots going across that’s because the water is coming out again, don’t lift the handle, don’t do anything to the machine, don’t turn it off or on, because you are in a descaling mode and this is the only way to get the light to go out, you have to follow these procedures.

So it’s finishing up, the first one it still says descaling it changes to descale and the k button is flashing, so i got to do this again, i got to do another one like i said, i had to do five of these in order for it to get to go out, it’s basically it has a process it wants you to run five, it’s going to run 5 fresh water rinsers through the machine to make sure it’s completely cleaned out of that descaling solution.

Now it’s time to use, i’m going to take my water reservoir, i’m going to fill it up and again during this whole process make sure there was no cake up in here you do have to have the needle basket in here, but no k-cup and you don’t ever lift, this handle just leave it down the whole time, you don’t ever press the power button but now the machine is ready to use.

Okay i put my carbon filter back in filled the water reservoir up turned it on, hopefully your descale light or clean light is off the machine’s ready to use, if your descale light did not go off, i do recommend running doing the vinegar article or doing a whole another bottle of descaling solution, so it is important to keep up on, these are very complicated machines on the inside, and if you want to keep it running at peak performance i do recommend descaling.