Today Keurig is synonymous with the highest quality brewing machines along with the ease and convenience of deciding how much to brew. There are many models of Keurig coffee brewing systems but today we will look at two popular Keurig 2.0 models, and compare the Keurig K300 vs K400 model brewing systems. We will compare the cost, options, size, style and features of each machine.

Founded by two college students sharing a room in 1990, Keurig has grown into a huge American company with the express intent of having single cup sized portions of coffee brewed at optimal strength and flavor control between different brews. 2004 marked the beginning of their signature Keurig systems, used in tens of thousands of offices across America, into the more affordable home market. Today Keurig is the number one choice for high quality coffee machines in both the workplace and at home. Their Vue packs in particular are considered by many to be the Cadillac of coffee brewing systems due to the customization and control options along with the Vue packs being recyclable.

Firstly, a bit about the 2.0 line of Keurig brewing systems. The 2.0 line allows for single K-cup use as well as the K-carafe which makes up to 4 K-cup sized servings. The 2.0 line boasts being able to read the K-lids of nearly 400 types of coffee, and a new strength control feature which means you can brew the coffee with whatever level of flavor you desire.

Looking first at the K300, which is a Keurig 2.0 model system, sporting the sleek design Keurig is known for, this system comes in color accents of Cherry, Azure, Amethyst, Green Apple, Lagoon, Smoke and Onyx. This system is designed to make either a single K-cup pack or a K-carafe with the simple touch of a single button. One key point with the Keurig K300 vs K400 is that this machine is only noted to read over 125 varieties of K-cup, K-carafe and Vue pack lids. This is still a robust brewing machine but if you’re going to be wanting a larger list of options you would want to go with the K400. This model has a 60 oz. reservoir, an auto shut off feature along with a monochrome display on the front of the machine and weighs just over 8 lbs. without the reservoir filled. 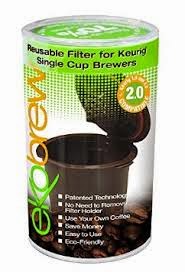 The Keurig K400 on the other hand can brew K-cup, K-carafe, and Vue packs of coffee to a higher degree of customizable strength making for a larger selection of coffees to choose from. Just like the K300 this unit comes in color accents of Cherry, Amethyst, Azure, Smoke, Lagoon, Green Apple and Onyx. The K400 also offers many more style options in regards to its touch display which unlike the K300 is in color and has customizable wallpaper. The K400 also has a 10 oz. larger reservoir, taking the already impressive 60 oz. reservoir of the K300 to a jaw-dropping 70 oz. size for more coffee when you want it. Customization is what truly sets this model apart with a full array of programmable options such as when to turn on or off, a custom clock design, the aforementioned wallpaper, favorites, and automatic brewing of K-carafe packs. The K400 weighs in at just a hair over 14 lbs. when the reservoir is empty, nearly twice that of the K300 so if having a more lightweight machine is important to you, you may want to take this into consideration when shopping.

Basically what the comparison of the Keurig K300 vs K400 systems boils down to is how much you want your machine to be customizable and match your style. The breakdown is as such:

So overall the decision comes down to your use. The K400 is aimed much more at the user who wants to customize their Keurig experience with a different more distinct look and the person who wants a programmable machine. Both models come in color accents of Lagoon, Azure, Amethyst, Green Apple, Cherry, Onyx and Smoke. The bigger reservoir and ability to shut off or turn on exactly when you want, make it more desirable and give it more ease of use. You really can’t go wrong with either model but the added $20 for the K400 might pay for itself with no wasted electricity. That’s not just a fiscal concern but could be a health risk concern as well. Nobody wants to start an electrical fire or have stale coffee burning at the bottom of their carafe. Burned coffee has been known to contain carcinogens which can lead to different types of cancer. Keep in mind this is only crucial to someone who often forgets to turn off the machine when it’s no longer in use. If you are stalwart on this you have nothing to worry about and $20 can be a lot of money to some people. Both machines have auto shut offs but the K400 shuts off whenever you program it to.

In summation, comparing the Keurig K300 vs K400, the user’s behavior, needs, and preference comes into play above anything else. The ease of use, pretty looking touch display, programmable features, and larger reservoir size make the K400 exceptional for busy working people. The K300, while still able to brew the exact same coffee, does not boast the large amount of features as the K400 and has a slightly more economical price tag because of it. Ideally, if you are in the market for a high-end coffee brewing system roughly twenty dollars shouldn’t be much of a concern and the bevy of programmable choices is a lot nicer. Once again though, you really can’t go wrong with either model as a truly quality product from a reliable American manufacturer.