All I Want For Christmas Is a Keurig?

By admin On July 17, 2016 In Keurig 693 views
★★★★★
All I Want For Christmas Is a Keurig?,5 / 5 ( 1votes )
The convenience of being able to press a button, and in less than a minute, pick up and sip a cup of perfectly brewed coffee each morning sounds as alluring as it is impressive.  In fact, it was such an eye-catching fact that the Keurig Platinum gourmet single cup brewer was actually featured in the list of gift items presented to celebrities who participated in the Golden Globe Awards in 2009!  But when it comes down to giving or receiving such a gift, is it really worth putting under the tree?

Firstly, there’s the price to consider:  Keurig brewing machines start from around $89 for the Mini (B30) model, all the way up to $200+ for the more expensive domestic versions.  It brews single servings of coffee from proprietary capsules called the K-Cups, so you’ll also find that the cost per cup is somewhat significantly more expensive than just using a press and brew an entire pot.  However, is this worthwhile as a trade-off for the freshness of a single-cup serve each and every time, the convenience of the process, as well as the choice of a variety of brands and speciality blends to choose from?

It is also important to realize that the coffee being brewed comes at a standard consistency and strength.  This means that you will have to tinker with the amount of hot water you add if the coffee is too strong/weak for you, unless you are willing to fork out more money for a re-usable filter provided by Keurig that allow you to dose the exact amount of grind you want in each up.  Basically, the theme seems to be that if you can afford it, then you can enjoy it. 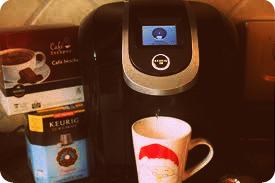 But let’s look at some positives.  Once you have the machines set up, these Keurig coffee brewers can churn out coffee in under a minute, which is almost certainly faster than conventional methods.  Keurig has also made their machines easy to use, so there is very little in the way of fiddling around with controls and parts when you most need a cup of coffee.

Is it a habit that you can keep up with if you receive it as a gift?  That would depend on how much of a coffee aficionado you are (of course this is entirely subjective). Keurig has such a large range of variety to choose from, and they have astutely collaborated with four major roasting companies (Green Mountain, Diedrich/Gloria Jean’s, Timothy’s World Coffee and Van Houtte among a growing list) to supplement the range of K-Cup flavours. With the specialty coffee movement expected to gain more momentum and support in the future, it can be expected that the prices will see gradual declines over the years.

Is it a suitable Christmas present?  The Keurig brewing system definitely has that wow factor, and will not look out of place in any home, and has the right combination of engineering and innovation to delivery on style and practicality.  In short, if you can afford it, then you’ll probably want to try it.

Related Post "All I Want For Christmas Is a Keurig?"

Leave a reply "All I Want For Christmas Is a Keurig?" Cancel reply